· Registered
Joined Nov 13, 2020
·
12 Posts
I do apologize ahead of time, as I have read A TON of posts regarding the AOD to t5 swap and in particular bypassing the Neutral safety switch and clutch safety switch in general. But I have not found a SOLID answer to my question, reading all of these threads is driving me crazy!
Car is an 88lx original 4cyl AOD. I have a 306 mexican block with a c4 which I am in the process of swapping in the t5. The manual pedal assembly is in and I located the 2 connectors that go on the left side of the pedal assembly for the clutch safety switch. The black connector already has a jumper wire in it (Pretty sure this is stock on the AOD cars). Should I just plug both connectors into the pedal assembly and call it a day? I know there is also another small grey connector floating around by the kick panel that some guys have yanked the jumper out as well (not sure if this is part of it) In regards to the NSS, my t5 is from a 94-95 which has no NSS (or NGS) ontop of the case. I bought the car with the c4 setup and the reverse lights never worked (if that’s part of it). I would just like to have it as stock as possible (while still using the AOD harness). I want to crank the car with my foot on the clutch, not the normal NSS bypass in which it can be started in any gear. Is there anyway to do this (and wire the reverse lights) and not get the 67 engine code with the idle surging problems that i’ve read about? Or do I not need to worry about that NGS considering my trans does not have it? Thanks in advance! I have attached a photo of the 2 connectors that plug into the CSS (took from google). Again, the black connector was already jumpered.

Mustang5L5 said:
5-spd Mustangs do not use a Nuetral Safety switch. They use a clutch safety switch. This is the black plug that has the jumper in it under the dash. Remove the jumper, and plug this into your clutch switch.

AOD mustangs DO use a neutral safety switch. The two wires that make up this neutral safety are part of the 4-wire plug that makes up the reverse harness. On the T-5, it's jumped out under the car.
View attachment 1072004
You can see on the harness the red loop? That's where the Nuetral Safety is jumped on a 5-spd. You need this jumper AND the plug plugged into the clutch switch to complete the proper starting circuit for the 5-spd.

Now, about the other plug under the dash and the plug on the top of the T5? That's the NGS. Nuetral Gear Switch. It's only purpose is to tell the ECU that the trans is in neutral. The clear one under the dash, you can just plug that in.

However, you don't have the one on top of the T5 since you are using a SN95 t5. You can swap the top cover from a Fox to one with it if you'd like, or you can just live with it. One thing to point out however is that AOD cars do NOT have the provision for the NGS plug on the T5 in the transmission harness. This is the harness from the driver's kick panel under the seat, and out to the trans tunnel. You'll need to swap the harness, or run 2 wired from the NGS to the kick-panel inside and tie into the body harness. 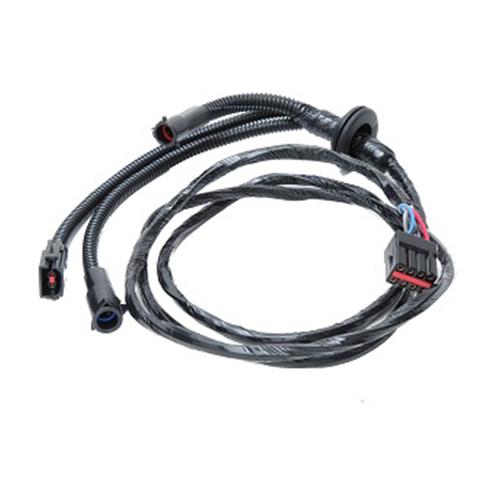 Use this 5.0 Resto 1987-1993 Mustang 5.0L manual transmission harness to repair your damaged or melted harness.

When I did my 5-spd swap, I forgot the little pin under the NGS on the T5. Found it days later on my bench and had a "Dammit, I forgot to put that in moment". I was't dropping the trans again so I decided to let it go. I changed all the other wiring, plugged in the two plugs on the clutch switch and the car was a driving 5-spd. What I found was that I would get idle hanging issues if I shifted to neutral and let the clutch out and came to a stop. The idle would hang up around 1200RPM or so, until I pressed in the clutch and then it would settle down to idle and be fine. I just lived with it. To run the codes, I would just run them with the clutch pedal pushed in. One day I finally got around to installing the pin under the NGS, and this issue no longer occurred.

In the past, I have recommended to some that they just put a 5A blade fuse in the clear NGS plug to keep it jumped out all the time. This would solve the idle hang issue, but I do not know what consequences are in terms of timing/fuel/etc within the ECU when it thinks it is in neutral.

In general, i'm a big supporter of the "Do it right" methodology in which all the harnesses and such are as close to factory as possible so that the ECU is as happy as it can be in terms of how it runs the car. For a AOD-to-5spd swap, that does mean changing the trans harness and having both NGS switches connected, as well as changing out the AOD ECU to a manual ECU. This also means you will need to check and possibly change the jumper on the O2 harness to a 5-spd jumper position as well.
Click to expand...

Thank you so much for the speedy reply! You are a life saver! So pretty much I have a few options. First I can change the harness to a proper t5 harness and change the top cover of the t5 to incorporate the NGS. Regardless the black connector that is jumped under the dash needs to get plugged in regardless of what I decide to do. I can plug both the black and clear connectors into the clutch safety switch, this will allow me to start the car only when the clutch is engaged but will leave me with idle hanging issues. And lastly, I could plug the black connector into the clutch pedal assembly and throw a fuse into the clear connector. Doing this will stop the idle hanging issues but would leave me with the ability to crank the motor in any gear. Is that correct? And thanks again.

Mustang5L5 said:
The correct, factory OEM way to do this is like this. This includes swapping the ECU to a proper 5-spd ECU and also assumes this is a factory mass air car. This also assumes factory harnesses are already installed

The above is plug and play. No guesswork or wiring diagrams needed and pretty straightforward. Now, if you did want to save a few bucks, you could just buy the NGS plug and run 2 wires to the driver's kick panel. You'll need to find the proper wire colors to hook to for this, but it will save you from having to buy the manual trans harness. You would need to track down the proper two wires in the driver's kick panel to tie into.

Now the most important part. The O2 harness jumper. Since yours is a converted 4cyl, this is especially critical for you, and i'm sure you've seen this mentioned before. The harnesses need to match the year and ECU and trans in the car. The jumper needs to be changed accordingly when you swapping ECUs (or putting a 4cyl conversion together from mixed harnesses).

Simplified, if this was a factory 5.0 with factory installed harnesses and originally an AOD, you would swap the jumper appropriately, test pin 46 for voltage, and then install the 5-spd ECU and crank the car up. With it being a former 4cyl, you'l want to do more due diligence that your harnesses are correct and verify against wiring diagrams, otherwise you risk damaging your ECU. This is very important.

Now, I know a few people will read this and think "That's BS you don't need to do any of that". That may be true, and the car will run and drive, but the above will ensure the car runs properly. No hanging idles, properly working safety wiring, and ability to run/dump codes without needing to jump out certain things.


My car was a speed density AOD and is now a 5-spd Mass Air car, so i'm speaking of this all from experience.
Click to expand...

Mike, fortunately I am itching to get this thing back together and drive! I am going to go the “quicker route” and put a 5a fuse into the clear connector. Atleast until i’m able to get my hands on the NGS switch/t5 top cover and t5 harness. I gather, jumping the clear connector (for the most part) will aid with the idle hanging/surging. But just to clarify this will cause the ECU to think the car is in neutral correct? And engaging the clutch is not needed when cranking the car?
Also, the small grey connector under the driver’s kick panel... I assume I leave that jumped?